Santorum was victorious in both Al and MS. One had to know that Romney's act would not play well down hyeah. The fact that Gingrich did not win in either of these two deep south states should show everyone (including him) that it is time for him to go. He is damaged goods anyway with just too much baggage. Well, I don't know, his baggage comes mainly from being a man who likes his tang. The current POTUS has some baggage far worse than that. Consorting with (ex) terrorists for one. Assuming of course there is a such thing as an "ex" terrorist. The President's familiarity with some "revolutionaries" from the hippy days is still a bit hard to swallow. I have often wondered why some of these "Weather Underground" types are  not eating their lunch in some federal facility somewhere still. Instead some have gone on to become quite successful. Living the American dream as it were.

March Madness is upon us. The best time of year for those interested in college athletics. I am a "football guy" for the most part, but it is hard to beat the intensity that is the NCAA basketball tourney. For the most part, this is a playoff system that is done the right way. Unlike the ridiculous system that is associated with college football. Oh well.......I regularly pull for the underdogs. Right now I am hoping that WKU, Lamar (or Vermont), Memphis, KSU, SDSU, LIU Brooklyn, and perhaps a few others will make some noise this year. Someone unexpected will. Happens almost every year.

I have been thinking a bit about Reagan lately. Remember him? Perhaps the most effective president this country has had in living memory. Not that he wasn't without fault. He allowed some pretty shady deals to go on under his watch. Also, as conservatives point out, he was all for less government interference in our lives. Or was he?
Remember when Louisiana (and one of the Dakotas I think;) did not immediately raise the drinking age to 21? Louisiana finally caved on that one but I do remember at the time thinking that it would be nice if they held their ground. The political class in Louisiana was afraid of losing some federal funding if they didn't play ball (as I recall). That and the semi terror group "Mothers Against Drunk Driving" was on the warpath. Louisiana, at least the part south of Bayou Rapides, is much like a friendly foreign country. The live and let live attitude is refreshing. Some rules just aren't enforced as much as the could be down that way. The yankee portion of the state is pretty much East Texas, Southern Arkansas, or Mississippi Delta. Nice sure, but just not the same charm. Anyway Reagan was not always about "less government interference" it would seem.

The USS Enterprise is out on her last active duty cruise. She has been around a long time doing the job she was designed to do. Making enemies and potential enemies nervous. When an American battle group shows up off your coast you have a problem. The problem has potential to be insurmountable.

Bout enough I guess. Rule 5 anyone? In keeping with the spirit of March Madness a college cheerleading Rule 5 perhaps? A cheap trick I know, but when in Rome........ 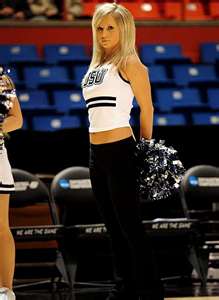 Posted by Bartender Cabbie at 8:09 AM

My husband and dad are pretty excited about it being March. They love football ;)