South Side Slim made an appearance in Houston evening last for some sort of fundraiser or something. Of course he flew in right at rush hour and the traffic disaster that ensued took a full three hours to clean up.  Ridiculous! Of course after the main event there was to be a private gathering at a "River Oaks home."  Ever been to the River Oaks section of Houston? Beverly Hills has nothing on these folk. Funny thing; these River Oaks types are the very same folk that Obama and Co. want to  pay even more in taxes.  As far as I know, he never ventured over into Dumbass Sheila Jackson Lee's district where he might actually be welcome. No money there I guess.  I know he did not head just south into Ron Paul country. There is some money in that neck of the woods  but most of it is tied up in big diesel pick up trucks (whether needed or not).

I have had some glimpses into the "River Oaks lifestyle" a few times in my varied career as a barman and cab driver. I have met some nice down to earth folk but I have met quite a number who are just a bit hard to deal with. Often the younger folk I have run across have an arrogant, entitled, attitude when dealing with the unwashed. The older ones keep that in check; at least outwardly.  What some of them think is classy is a bit odd also.  Now I am no interior dickorator but I do know tacky decor when I see it. Just because someone is very wealthy does not always seem to translate into a refinement in taste. Some of the homes I worked in as a barman were tacky to the extreme. When one has a full sized stuffed lion in the living room surrounded by African tribal masks, well, that is just trashy. I don't care what it costs.

One thing a lot of these River Oaks folk like to do is "fund raise" with a whole lot of heavy drinking in the process. A lot of them do not have the sense to not drink and drive but I have carted a few around who have a DWI or two under their belt.  Even they aren't that dumb to continue to drive around hammered after that legal nightmare.

I vividly recall one fine evening picking up a couple of these pampered young River Oaks fellows who, after a night of heavy drinking, were interested in interesting things. They asked me for my advice on the matter and as a man who is customer service oriented, I recommended a couple spots for them. After some discussion, they decided on what would be of interest to them and away we went. They asked me to "leave the meter running" and wait a bit until they return. It is usually a professional error in judgement to do so. The reason is simple. After recommending a certain type of "gentlemens' establishment" to customers they are grateful at first. After their affairs are concluded, buyers remorse may set in, as they may be hundreds of dollars lighter in the wallet. They may feel stupid and be looking to blame anyone but themselves. The cabbie who recommended the spot is an easy target. It is best really to just drop a customer, get paid, wait a few minutes and go get your "finders fee" from the fine establishment and then boogie on to the next call. Let the sporting man find another cab to bring him to the hotel or home (or wherever). At any rate on this particular occasion I violated the "rule" and waited on these guys. In no more than ten minutes both came literally running out of the business and begged to get into my locked cab. Behind them was a very large Black man with a 9mm plainly visible  tucked into his pants. What these boys did to rile up the bouncer was beyond me but they were not getting into my cab. Luckily for them the issue was decided after some very harsh words from the bouncer (and another 50 bucks from the bouncer given to yours truly). I let the lads in and took them back home. They were rather subdued and I did not ever find out just what these boys did in the hoorhouse to nearly get shot over. Must have been something really really stupid. The whole episode made me wonder if the rumors of inbreeding among the River Oaks community are true.
This is reminding me of another little episode that was kinda funny, A few years back I mistakenly picked up some crazy old dude at a low rent hotel who wanted to go here and there. For whatever reason I decided to do so. It became apparent pretty soon that he was crazy as hell and had very little money. Apparently he was a direct descendant of gunslinger John Wesley Hardin also. I told him that his cab ride was nearing an end and he needed to get out pdq. He chose a very very fancy and upscale eating establishment that caters to the River Oaks crowd. I dropped him right at the door and was beginning to see the humor in the situation and I found my irritation (at him and myself)  slipping away.  He gave me a dollar and a lighter, and then told me to come back in one hour and he would pay the rest of the fare "in gold." I got out, opened the door for him just like he was a rear admiral or something and thanked him for allowing me to be of service. I was trying to keep a straight face as I could see restaurant staff and customers beginning to gawk. I watched him enter the place and then drove on as our business was concluded. I shortly got a call from the office about dropping this "bum" off at this fancy joint. I explained that this is where he wanted to go and I was just doing my job and offering excellent customer service in the process. No one could argue with me there. If a bum wants to get dropped off at a fancy place or if a Michael Berry wants to be dropped off at a rough trade Gay club; what concern is it of mine? A cabbie's job is to deliver customers to their desired destination is it not? At any rate that whole affair still amuses me a bit and I still have the lighter that the guy gave me. A little memento of the experience........I guess that is about enough talk about these River Oaks pests.

It is being reported now that whole milk is to be taken off the "menu" in public schools. Ever eat the tripe that is being forced on kids? Ammonium hydroxide (pink slime) is still allowable to be added to meat products apparently but whole milk is poison or something? Another example of government interference into even the most mundane facets of our lives. I remember the school lunches at the "reform school" where I (finally) matriculated. Good down home southern cooking which on any given day might include biscuits or rolls from scratch, real fried chicken with mashed taters and gravy and yes even whole milk. Afterwords we could go outside and have a smoke in the "smoking area." They did frown on the use of marijuana though. Best not get caught with that substance  or you were in for a  bad day. A very bad day indeed.

I know a person who has an autoimmune disorder that will likely eventually kill her. More often than not she is in great pain and has to rely on strong prescription painkillers to remain somewhat comfortable. These drugs tend to make her completely stoned. Often to the point of incoherence. I might mention also that these "medications" are prohibitively expensive. Often she goes without because of the cost. I would recommend that she try a little pot frankly. Medicinal MJ is not legal in the Republic but I certainly would not let that stop me. If I or one of my family members was in need then I would "score" it. Hell even that utterly sane and pious Christian man Pat Robertson sees the ridiculousness of the the "war" on Marijuana. Yes, Yes I know that foreign narco terrorists control some of the MJ trade, but that could easily be rectified by some sort of legalization policy. That and some Hellfire missiles fired at Mexican kingpins.

Now enjoy some vintage rule 5....A stoned hippy no less. 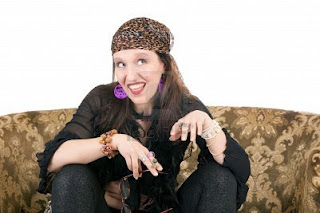 Posted by Bartender Cabbie at 7:39 AM