Yesterday I was casually looking through the jobs available in the Houston area and came across an opening with the SEIU. You know, the the organization that Hannity says is the heart and soul of what is wrong in this country. Actually the job looked pretty interesting to me. It is advertising for an organizer for the private security industry in the area. If there ever was a group of workers who needed union representation then it is this bunch. I did not apply for the job of course but I think it would probably be pretty interesting. Fruitless and a waste of time certain, but interesting none the less.

I have said before that I am neither pro nor anti union. It all depends on the circumstance and the industry in question. If I were in a union and I saw tangible, concrete monetary results from being a member, then I would be all for it. If not? I am not interested in paying dues for nothing.

Some groups certainly need representation. Truckers and security officers certainly are at the forefront. Yes even professionals like teachers need some representation in this day and age. It would be hard however to get on board with the SEIU simply because of what I perceive to be a radical, almost Marxist, agenda. I suppose one could separate themselves mentally from that and concentrate on just the organization of one specific industry. I don't know. Maybe I may apply after all. Funding for my current gig in the public school system is winding down. I ain't above leaving my present position early for the right job. Probably not though. What these folk at SEIU don't realize is that a security firm would have to raise their rates substantially to pay the guards in their employ a "living wage." That would mean (of course) their clients would be asked to pay a lot more for the same service. I would imagine that the  majority would just decide that on site security may not really be all that necessary after all. No one would be the winner here. Except for some criminals of course. Here and there as it might be.

What is a living wage exactly? I heard some in Tulsa tell us it is about 18 bucks an hour. Really? Can you see the local gas station being forced to pay their clerks such a wage.? There would be a few less places to fuel up and get your morning joe if that were the case. I can assure you of that. The flip side of course is that some firms are notorious for basically ripping off their employees. The Evil Empire (you know who I mean) comes to mind. I avoid shopping there(for the most part). If you spend 20 years or so of full time employ (in non management) at the Evil Empire then you may make about 13 bucks and hour. Here in this neck of the woods anyway. I would imagine there are some adjustments for the differences in the cost of living throughout the country.Is that a living wage? Perhaps for those who are very frugal. Does this mean that the Empire(or anyone else) is obligated to pay this 'living wage" to their employees. It would be nice sure but it is not (and should not be) a govt mandated requirement. The Empire would survive (and still profit) of course, but a great many "lessor" businesses would not. The Evil Empire employees are a good candidate for organization I would think.

Good luck with that.

How about some rule 5? Remember the lovely and talented Annette Haven? No? I'm sorry. Take a gander. 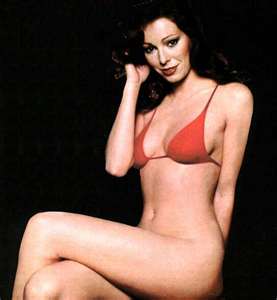 Posted by Bartender Cabbie at 9:15 AM

I would be interested in reading it. I agree that "labor unionism" has killed a golden goose and have turned a great many people off who would otherwise support organization

Sexual Harassment is a unjust,tyrannical law that we did not need passed, it ought to be disannulled,done away with. Its an evil law that misquotes the verse of scripture in the Bible that says to make a man an offender over a word. Thats not Christian morality that should have been being imposed on us unjustly. You shouldn't be telling lies about our compliments and getting away with it.