Monday last was Memorial Day - a day in which we are supposed to  remember those who fought and died for this nation. I wonder what percentage of the populace appreciates or even knows what the day is supposed to be. One of the most important "holidays" in the American calendar.

From the Revolution to the present day war with Islam, Americans have died to defend our freedom. Some wars certainly just and others perhaps not so much. That matters not. The American fighting man (and woman) is not to question why they are put in harms way but to do their duty regardless of the circumstance.

A salute to those who have paid the ultimate price.
Posted by Bartender Cabbie at 8:27 PM No comments:

Almost Forgot This One - Close Call

I mentioned earlier that today (or yesterday) was the anniversary of the Rammstein Blitzkrieg of the Toyota Center (Heinz Guderian would be proud). Well I damn near forgot that it was also the anniversary of 13 years of marital "bliss." Remembered just in time. Doghouse avoided.
How 'bout some more  Rammstein? This one is a bit disturbing. Aren't they all?
Posted by Bartender Cabbie at 10:01 PM 2 comments:

Rammstein In Houston - Has it been a year?

Today (or was it yesterday) is the anniversary of Rammstein's invasion of the Toyota Center. Doesn't seem like it has been a year. Oh well. It was well worth the price of admission and I wish to see them again. Enjoy Ich Will from the Houston show last May.
Posted by Bartender Cabbie at 10:31 AM No comments:

Some More Advice To Truckers

I guess the big news this week is the "IRS scandal." It displaced the imminent North Korean threat and some trial or other about a murderess. Always something it seems and I have been way too busy to pay attention to any of it. Probably not missing much.

One thing I have been wrapped up in is the goings on in the trucking industry. I may or may not get back into the education field this next semester but I certainly won't be going back to work in the juvenile corrections "industry." What a sad scam that is.......I might get into that at a later time...At any rate, the transportation industry is always a good fall back. It must be, I have spent a good portion of my adult life working it in one form or other...........

A few years ago I left the trucking industry to work in education (I mentioned I am considering going back) and swore that that would be it for me and hanging around big trucks. Never say never they say..There have been a lot of changes in the short few years that I have been gone and it has been an adjustment sure.
As a transportation "manager" I see some good and some not so good.
One thing that hasn't really changed is shell game that trucking companies all play, ensuring that a driver does not get all the monies deserved for all the work they put in. That only changes on a case by case basis when drivers make threats (and some make good on those threats) to walk and get another position (easy for a good driver to do), leaving the company holding the bag with contractual obligations that can not be met. Often the company will have to relent and have to pony up more money. Something that they do not like to do and will not usually do unless their hand is forced. That hasn't changed and is not likely going to.

Some of the new "hours of service" regulations actually make a good deal of sense and ensure that a driver can not be overworked. Of course that only works when a company uses electronic logs..those still working with paper logs, well, that is a different story. Any halfway intelligent driver can manipulate those legal documents (often with tacit company approval) and still run just about how they want. It probably won't be too long before all trucking companies of any size will be required to run "elogs" and that will eliminate most, but not all, rogue activity. There are some new federal regulations on the horizon (to be implemented shortly) that may be taking things to the extreme. It certainly will change things and might perhaps make it even more difficult, costly, and time consuming to get a can of beans to the grocery (yes people food on the shelves just doesn't magically appear - we haven't learned how to teleport quite yet). These new regs might also cut further into driver pay ensuring more people leave an already extremely short handed industry...We will see.

How does a driver deal with all the new regulation, company shell games, etc. etc. and still make a good income? There are more than a few things that can be done.......

Right now the driver is, well, in the driver seat. Many of them have not come to that realization yet but even the most obtuse is aware that the light bulb is turned on. There is an extreme driver shortage and it is getting more desperate by the day. In the chemical transport industry (of which I am most familiar) there is an extreme shortage of quality drivers and it is beginning to leave shippers scrambling, scratching, and holding the bag. Good. This allows the trucking company to pick and choose freight, enter into favorable contractual arrangements with shippers, and get paid for all work performed. Again however the trucking company is short drivers and are constantly in search of employees.....A big change from the mid nineties when I got involved in this industry. At that time these shippers made huge, often ridiculous and undoable demands, and then balked at paying all portions of the invoice. The worm has turned sure.

Again how can drivers ensure that they reap all the benefits of being a "commodity" that is in short supply......?

One way is to demand fair wages for hours worked. Hard to do in this business but this example might help. One trucking firm with which I am familiar will pay drivers a headhaul percentage (minus the usual scamlike deductions) to move a load from point a to point b. They will then turn around and only pay a "back haul" rate to the driver thereafter even though the company is being paid head haul rates both ways. An example would be to load out of Houston for head haul money, offload in the Chicagoland area, and then receive a load for diminished pay out of there for distant parts. Of course the company gets the full head haul rate out of Chicago and stiffs the driver. Pretty typical.
An easy fix, and I have seen some drivers actually refuse to haul the loads for backhaul pay. Most do under the premise that "something is better than nothing." It would improve every ones chances at decent income if more would just refuse to haul under that arrangement.

There are times when a driver offloads in an area where there is very very little in the way of chemical freight (dry freight runs into this problem also) and the law of supply and demand dictates that the rates out of that particular area are going to be low. In such cases, and only if a load from that area is heading back into the major chemical shipping centers, then something may indeed be better than nothing. If the load is going from one place that has cheap rates to another place that has no freight then that is to be avoided at all cost until the rate is "right." This is something that companies I have been associated with all seem to have trouble with. Of course there are a lot of MBA grads in charge. That explains some of the stupidity I suppose..........

The trucking company should avoid brokered freight at all costs. A driver who is on percentage versus mileage pay especially needs to be vigilant on who the real shipper is before they note on their paystub that they hauled an 800 mile hazmat load for a hundred and fifty bucks. It happens rather frequently. It should be a rare case indeed when a "brokered" load should be taken. There are cases where it might make sense but that rarely. It is often pretty easy for a trucking "manager" to figure out the real shipper in such cases and cut out the middle man by offering a better rate than the broker, and still come out ahead on the deal. I have seen this happen and have more than once been involved in working out the details on such an arrangement. A bit unethical perhaps. Or not. The best thing entirely would be for a company to not haul a CH Robinson, Odyssey Logistics, etc. etc. load. Companies of that stripe are actually aggravating and already precarious driver shortage.  Really the only thing a driver can do in such cases is get a firm amount, in writing if possible, on how much they will really be paid for hauling any particular brokered load. Refusal to haul would be an option also. This does work and for all the gnashing of teeth on the part of trucking "management" it is highly unlikely a good driver will be fired for "refusing dispatch." The driver shortage is that severe.....

A lot of companies have gone to what they call a "lease purchase plan" for drivers who want to "own their own business." A driver should not ever, and I mean ever, fall for this scam. What happens of course is that the driver, being an independent contractor, will be responsible for their own maintenance, usually offered at exorbitant rates, by the trucking company. Often these tractors that are available for "lease purchase" are of the older and therefore problematic variety, and it becomes nothing but a problem, a costly time consuming problem, for the driver to deal with. A win for the company, the cost of maintenance is off their books, but a loss for the driver. Incidentally the independent lease contractor will still be treated as a company hand. It makes no sense for any driver to get involved in any kind of lease purchase arrangement offered by their employer. Ever. If one just has the bug to be an owner operator then they should buy or lease good equipment from a reputable dealer and give is a whirl. Incidentally Yellow Cab in Houston has a very similar "lease/purchase" plan for those in the taxi industry. The cars are nothing but junk and the maintenance is the responsibility of the "owner/operator." (Sadly I once was admittedly stupid enough to fall for this one and I don't even hold an MBA).  Some folk in the cab business buy a brand new or slightly used car (not a washed up cab) of good quality from a reputable dealer and lease on with the cab company and actually do rather well. Trucking is no different. Same concept different equipment......


Time runs short and I will continue the "advice to truckers" series at another time.

By the way, not all truckers are men.
I think this is the Ice Road trucker woman, but there are many more like her. Some even near as pretty. Trust me on this. 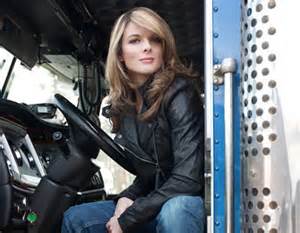 Posted by Bartender Cabbie at 9:09 AM 3 comments: