Well it seems that a soldier has gone off his nut and killed some innocents in Afghanistan. Horrific. Less of the ultra silly have been making hay of this than I would have imagined (guest commentator JP over at brilliantatbreakfast.blogspot.com notwithstanding.) The whole thing is a tragic event that further damages our standing in the region. It is probably high time to get out of this sad land. Osama is dead and gone. Mission accomplished. Nation building is a fruitless endeavor anyway........

The other day I noticed some over the counter medication at Target that was produced in Israel. I certainly am not one who will get on the "divest from or boycott Israel" bandwagon. The contrary in fact. Still I have to wonder who is actually physically producing this particular medication. After all, much like food products, medications in pill form are ingested. Do you see where I am going here? No? Think about it. Just because something is produced in Israel does not mean that Israelis are working in the plant. Does it? You wouln't eat candy imported from Pakistan would you? The West is after all at war with Islam. "What?" "We aren't?" "Hmmmm." "My bad" (as the young folk say).

A couple of weeks back it came to light that the folk over at Northeastern University (of course)  have banned the fast food outlet Chick Fil A from campus. Something or other to do with an "anti gay bias." So we are told. I have not noted any "anti gay" activity as a corporate policy at Chick Fil A.  Have you?  Granted they probably don't want guys blowing each other in the parking lot......Anyway, if I were in management at the chicken giant I wouldn't worry much. Find a nice location just off campus and open up shop. It won't hurt for business.

It seems that the DOJ has "struck down" a voter ID law that was to come to pass in Texas. This is no surprise..  Funny; in Texas one needs a license to fish, hunt and drive. Hell you even need a license to tend bar. (Have to pay the state for the privilege too). It only makes sense that some sort of govt issued ID to be presented at the polls.
Actually Texas is one of the few states that could get away with just ignoring the ruling of the feds. It wouldn't be a good idea and it won't happen but it could sure be done. Fun to think about...

The price of fuel continues to rise. A national average of bout four bucks a gallon derailed the economy last time. It never fully recovered. Or has it? Depends on who you believe. Would I be out of line to insist (again) that we develop our own energy needs?  Might help to get our material off the world market also. 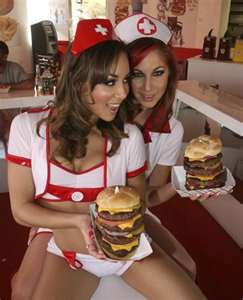 Posted by Bartender Cabbie at 10:00 AM