Weighing In On The Texas Public School Issue

It looks like the Dallas Independent School District will be closing eleven schools to "save money." One thing that is sure broken in the Republic is the public school system. It is a statewide nightmare.

Interestingly enough during the packed school board meeting some of the "trustees" continued to absent themselves from the proceedings. If one can't stand the heat......Yep there is a problem in Dallas but it is just not limited to the that silly little town up the road.

I actually know a person that served on the Columbia/Brazoria School District for a term and some of the stories I was told about the dumb asses on that board were laughable. One in particular stands out to me. It seems that while teachers were in danger of being laid off the school board was debating on the best way to fund top of the line "astroturf" for the football field. Therein lies on major problem in Texas. These fools will put as much money into the sports programs as possible and look to cut the budget on real education. Ever been in a public school? Take a look at all the coaches who are on the staff who grudgingly are forced to teach a class or two in the real curriculum. Most do a very poor job. There are exceptions of course but not enough to not warrant painting with a wide brush. As a general rule, a "coach" is more interested in teaching some kid the prevent defense than being a real "educator" (I hate that word).

Don't get me wrong. Sport is an integral part of education, but when a school has four football teams, seven roundball squads, etc. etc. That is going just a bit far. Have a varsity squad and the rest of the kids will just have to do with the standard physical education classes. Fair to those who want to play sports? Perhaps not. It would save a ton of money though. A ton.

The legislature in Texas has not adequately funded schools for a long long time. No money they say. Yet here in the Republic there are numerous agencies which are outmoded, unnecessary, and redundant. The Texas Railroad Commission is one that should go. Texas Alcoholic Beverage Commission is another. The list could go on I am sure. Perhaps some of those folk need to get off the public tit.

As long as I am braying about the screwed up school systems in Texas I guess I ought to talk about the TSTA. Should a teacher become a member of a public labor organization? Probably so. Unions can, at times, be a major problem but when teachers are subjected to the whims of the some of the folk that are on these school boards along with some of the useless appendages that are administrators, well, they need some protection. Don't believe me? Go to your local school board meeting and see for yourself. I would wager that on each and every board at least half of the members would make Dumbass Sheila Jackson Lee seem like a Rhodes Scholar.

Yes there is a huge problem facing the public school system. Huge. It is likely insurmountable.

Now enjoy some rule 5. The lovely Brenda Song for your viewing pleasure. 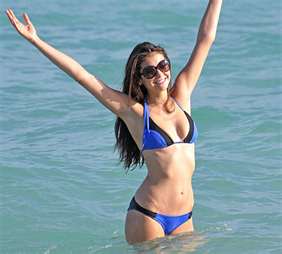 Posted by Bartender Cabbie at 8:49 AM

"Sport is an integral part of education"

I'm not sure of the degree to which I agree with that. Intramural sports, sure, but that doesn't need to be particularly expensive. Intermural sports, with the concomitant stadium, uniform and travel costs... I don't think so. When budget becomes a problem, I don't think that crosstown rivalries really matter.

Oh, and yes, she's nice, but she has way too many clothes on.

The football worship in Texas schools has always irked me, especially when things like welding shop, wood working, auto mechanics, etc. get chopped in favor of "astro turf" and new football uniforms.

Oh yeah, you're getting the hang of rule 5 now!

I recently put out an ebook of my writing, called The New Death and others. It's a collection of short pieces, mostly dark fantasy.

I was wondering if you'd be interested in doing a review on your blog.

If so, please email me: news@apolitical.info. Let me know what file format is easiest for you, and I'll send you a free copy.

You can download a sample from the ebook's page on Smashwords:

Totally agree with your assessment on athletics taking more money than academics. A huge amount of money in middle and high schools being spent on stadiums, locker rooms and other athletic spaces.

Couple that with huge salaried principals, superintendents and people that double dip (get retirement AND continue working) - too much money.

It is a problem but it appears that those in administration would cut Math and Science before touching a football program. It is ridiculous. If there is no money (as they say), then it would seem that these programs would be the first to go.