Glad I Went To the Tractor Pull

I was informed a while back that I would be going to a "tractor pull" Saturday and would miss the Saints game. OK it wasn't exactly a tractor pull I suppose, rather something called the Monster Truck Jam. At any rate I had the game on record and was careful not to try to find out the score. Some guy mercifully announced over the loudspeaker that the boys in drag were victorious over the New Orleans team.  I could not tell you the score as of this writing. Who cares at this point?

Glad I didn't stay home to watch or view the recording. The monster trucks show was surprisingly fun and certainly better than watching America's team blow another playoff run.

There were\ some down at the mouth locals in New Orleans last night. Probably didn't last too long though. Easy place to drown your sorrows is New Orleans. Besides the Mardi Gras season has commenced. Why worry about a silly football team?

I have recently started to warm up a bit to the Texans and guess I will root for them although it is not really the same thing. Is it?

How could it be? 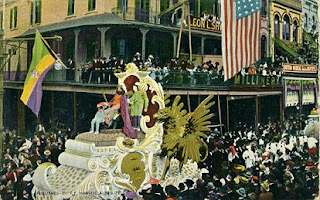 Posted by Bartender Cabbie at 7:14 AM