An American Poodle Speaks On The Issues of The Day

America's favorite poodle, one Debbie Wasserman Schultz, was seen the other day speaking with one of the MSN types, (Wolf Blitzer if memory serves), and it became apparent that she has not a clue what she is about.

As you would imagine the main "conversation" was about some sort of gun control which, predictably, she is in favor of. I doubt the woman could tell an "assault" weapon from a shotgun but what the hey, no need for that to stop her. It is obvious that she has no clue about the 2nd Amd. to the Constitution of the United States. None. Or perhaps she does and just does not care. Perhaps she thinks it is time to tamper with it what with the Constitution being a "living document" and all; (which of course is nothing but code for "something that can be scrapped" if it becomes inconvenient for some wacko agenda or other). Typical.

It also became apparent that the 1st Amd. is a bit cloudy for her. Something about the need to regulate "violent" video games or some such. She stated that she is a supporter of the 1st Amd. "but.........."

There is always a "but" with these leftist/statist types. Always. 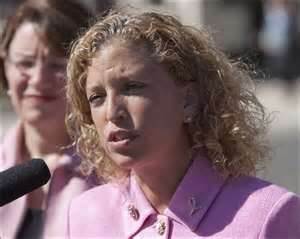 These people used to be nothing more than good comedy and fodder for a good joke but those times are passing. Fast.

Some are becoming a danger to liberty.
Posted by Bartender Cabbie at 3:54 PM

Ms. Wasserman-Shultz is becoming an ever increasing disappointment to me. During the Clinton campaign I admired her ability to support her cause and her candidate without sounding like an idealogical puppet, but once she has been on the Obama bandwagon she has been nothing but a parrot. She spouts slogans and trite phrases and clearly believes not one shred of anything that is coming out of her mouth. Tribal politics at its worst.

I never paid the slightest attention to her until recently.

in the vanguard said...

But because these lamebrain misfits have center stage, in the regime and in control of the media, we better home a new media, like that of the internet, quickly replaces and displaces these evil people - for that is what they are - and which is why these lamebrains don't realize they're lamebrains - because their purpose for existence is succeeding. Nobodies like this one have been planted almost everywhere where it counts, by now. You have them in the Supreme Court, you have them in Congress, in the White House, in the military, in the Pentagon - where not??

I truly think the end of America as we knew it is in the offing and all hope that this is but a passing nightmare - I fear is but the beginning.

Why was Sarah Palin sidelined? Not because she was in any way a liability. She must have been threatened by assassination. I would not put that past the regime whatsoever? Have you heard a peep about those who have already been eliminated? Like John Wheeler of the pentagon, like Breitbart, like the guy who autopsied Breitbart? Nothing. All quiet of the Western front. But evil is prevalent, we all feel it, we all know it - but the young fools now attending college and learning nothing but trash and pseudoscience - know nothing!