Yesterday I listened a bit to Clemens' lawyer Rusty Hardin talk some about the case on talk radio (I think it was on the Matt Patrick Show). After listening I began to think that perhaps Clemens was the innocent victim in a govt push to discredit him (for whatever reason). Hardin is convincing no doubt but then again that is his job. If you are involved in some silly shit and caught with your pants down (so to speak), and have a very healthy bank account then perhaps you should give Rusty a call.

Did Clemens get away with steroid use and perjury? Perhaps. Perhaps not. He did play in an era where steroid use was in vogue. Look at some of the sluggers from the late 90's. You can't tell me that quite a number of them were not on something. Or you could I guess but I wouldn't believe it. As far as I can tell Clemens did not develop the type of body that is associated with steroid use, but again, he did play in that era. Doping was likely accepted and par for the course among a certain set of players.

One thing I did learn from the talk show conversation between Hardin and Patrick was that Clemens got crossways with the esteemed gentlemen of Congress who were "leading the investigation" into steroid use in baseball. That probably had something to do with all the hoopla.

If Clemens is guilty, well then he got away with it. If not, then he was victimized by a govt out of control. His reputation is tarnished either way. His character is suspect and his legacy will always have an asterick beside it. Unfortunately there is very little he can do about it.

Apparently one (handsome) Henry Waxman (D-CA) was one of the busybodies behind this "investigation" into steroid use in baseball. It is not surprising that he (and others) would be influential in going after someone who did not play ball (no pun) with said investigation. Perhaps this Waxman should just keep hanging with the Hollywood crowd and leave the rest of us be. Didn't he have a part as one of the mutant vampire type beings in the Will Smith film I Am Legend? 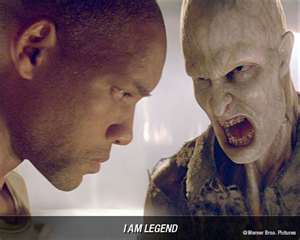 If I am not mistaken there is a resemblance here. I could be wrong.
Posted by Bartender Cabbie at 10:05 AM

After reading Patrick Dorton's piece in my local fish wrapper (re-printed from the Washington Post) I am damn near convinced that Clemens really was innocent.

I am up in the air but still leaning toward guilt. No matter really. This was nothing for members of Congress to become involved with anyway. They were doing nothing more than grandstanding and if Clemens is truly innocent, then they have still ruined his reputation for all time. If he was not innocent then he got away with it. More power to him I suppose. Still this investigation should have been nothing more than a MLB or local judicial matter.