I have not had any real time to blabber lately. I have been on the new job almost non stop for near a  a month now and just have not felt like jabbering about this and that. I know the multitudes who read my "work" have been wondering where I went. The new job? Thanks for asking.  Probably the worst job I have ever had (and that says a lot). High turnover, unrealistic expectations along with somewhat below par pay....... I should not have violated my "hold suspect any job that is constantly advertised" policy. Needless to say I have a mission on my days off which is of course to keep looking.

There have been a few things going on lately that are rather interesting and I suppose I will do my part and comment.

It appears that there is a janitor strike in progress (or just winding down) in the Houston area. Good. Even though the near Marxist Service Employees International Union is behind it (you know, the folks that Hannity says are tearing our nation apart), the janitors are not unreasonable in their demands and it is a fact of business that they are taken advantage of. It would be nice to see the folk at some of these high dollar fancy offices have to clean up their own dung rather than pissing on the floor and relying on Juanita to clean up after them. It would be good to see a little justice in this arena I suppose. Of course if any of those that are out on strike are found to be illegal aliens I would expect to see them deported forthwith and their employers held accountable for violating law. (Like either will happen).
I have said before that I am neither pro or anti union. They have their place (even some "public sector" organizations perhaps). Some can go too far though and then there is a case of the tail wagging the dog. If I were in a position that actually had workplace representation as an option, and I saw some real monetary benefit of membership, then I would say "Sign me up Fidel." If there was no real benefit well then I would have no interest in paying dues for nothing. Unfortunately many labor organizations are nothing more than political groups who use member dues to campaign for "labor friendly" candidates while union leadership pads their personal bank accounts with member dues.

Did I hear Clemens has been acquitted. Really? If I were a betting man,  I would wager that Roger did indeed use "performance enhancing drugs" and then lied about said use. Personally I don't like the guy. There is an air of entitlement and smarminess about him. That being said however, I certainly have the feeling that the govt case is more about taking down a person of stature rather than really getting to the bottom of the matter. Anyone remember the Martha Stewart thing a few short years back? Same thing. It doesn't really matter though. His legacy is ruined and that is a shame and perhaps even unfair. That being said, I am sure I am not the only person who believes that Clemens is really guilty, but to be honest, I do find it a travesty that this whole case was taken to this high level. It should have been a MLB internal matter at most. Oh and Andy Pettitte? Whether his testimony was accurate or not, he has turned out to be a bit of a rat. At one time I actually felt highly of him.

The Obama administration has accused Russia of aiding the Assad regime with weaponry and whatnot. Typical of the Sovs. Their never ending quest for access to a warm water port to support their "war fleet" is really likely behind the matter. Assad will gladly supply that port in exchange for aid I'm sure. Frankly it would be best to just leave matters as they are. Let the Syrians fight it out. Would it be better for the current regime to stay in power or for an Islamist group to gain control? That is the question that should be asked. What is the best interest of America and the West is the issue. Aspirations of democracy for those in the Arab world be damned. As for the Russians? Other than possessing nuclear weapons they are of little account. Near irrelevant. Russia is surrounded by peoples who hate and fear her and finds herself (again) contained. As it ought to be. 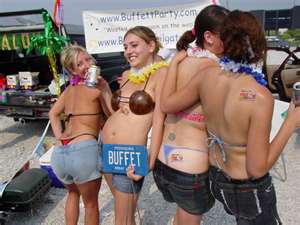 How about just a little rule 5 before I go. A few Buffett groupies perhaps. I have been thinking a bit of the Jimmy B show a couple of weeks back (where my friend was arrested for "public intoxication" or some such). About the only thing worth damn about one of those Buffett get togethers are sights similar to this. Or do you disagree?

Gotta get on that job search. The clock ticks.
Posted by Bartender Cabbie at 7:09 AM

I can't imagine why anyone would be surprised the Roger Clemens appears to be an asshole. It seems to me that a majority of people becoming that wealthy and powerful for doing essentially nothing would accrue a sense of entitlement which would lead to them becoming assholes.

Interestingly, the 1% are hated and reviled, but among the most wealthy are athletes, who are fawned upon and admired. The reason for that is not entirely clear to me. We loathe a man for using his brain to become wealthy, but we adore one who does so by being a physical freak of nature. That says, I think, something rather unhealthy about this nation.

I agree that the worship of pro athletes in this country borders on insane. As for Clemens, I think he probably, at one time or another, did use some sort of enhancing drug. It was apparently pretty common in his era. If he did not, well then he was the victim of a govt smear.