Lately I have been having a rather robust discussion with some of the folk over at Driftglass driftglass.blogspot.com concerning the advent of "hate" music. I pointed out that some of the so called "gansta rap" is little different from some of the "white power" type music that one can find. Most disagreed. I will get back to that discussion later today or perhaps tomorrow. That is not what I wanted to talk about this fine morning though.

I consider myself a centrist frankly. I have learned from my reading that those of us who are considered "centrist" are not well thought of by those on the extremes. Recently I was compared to some guy by the name of David Brooks. Is that a compliment? Apparently not. I did not know who he was to be honest so I looked him up. Apparently he "works" up there at the NY Times and thus would explain my ignorance as to his personage. Those of us in the Republic or Southeastern Conference territory have no interest in what is said by anyone in the Times. Just not worth the bother. Most would probably have more interest in what the owner/editor of the local shopper has to say on any given subject.

Why are centrists hated? The only conclusion I can come to is that we put a brake on childishness. Neither the far right nor the screeching left can get through most of what they want at any given time. That makes them furious.

Enjoy this pretty young thing. Time for a trip to the beach, 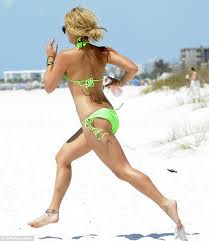 Posted by Bartender Cabbie at 11:16 AM

Email ThisBlogThis!Share to TwitterShare to FacebookShare to Pinterest
Labels: Centrism

And exactly why are you reading the gibberish at driftglass? The clowinshness is merely emptying a thesauris onto the page in a pathetic attempt to sound intelligent. It is the work of the prince of buffonery.

"And exactly why are you reading the gibberish at driflglass? Good question. Somewhere along the line I saw a link that was damning those from the south. Quite insulting. I read it. Posted a response on this forum and it went from there.........I have had an interesting discussion though with some of the readers concerning "hate" speech. Eloquent writers over there, but that does not impress me as much they impress themselves. They are still wrong.

Your impression of that site is about as good as can be described.

If demagoguery is a word then that would be what I would use to describe the Driftglass site. Funny, a lot of the commentators there seem to curry favor with this dude. It seems that some of his readers believe him to be brilliant or a man of some importance. That seems odd to me. Or perhaps I was reading too much into it.