I did not watch the debate the other night. Ghost Hunters followed by Paranormal Witness took precedence. BTW Fort Ontario in Oswego, NY is haunted as a mofo and checking that out was much more interesting than watching a couple of boobs go at it. Besides, I already will vote for Romney. Don't think much of him, but I know what we are getting with South Side Slim. It is high time for a change. To be honest, if the Chicago fraud wins again, I won't get my panties in a knot. I am pretty sure that we are headed toward third world status and that probably won't be changing no matter what. Shame.

They do say that Romney made Obama look like a child who didn't study for the big test. That may have been why he performed so poorly? Gotta prepare Mr. President. The country (and his ridiculous Republican opponent) let the man slide by in 2008 by letting him bellow "hope and change" without serious challenge. No one wanted to be seen as offensive and racist I suppose. You see that in corporate America all the time. I have worked with a few "minorities" that were stupid as ducks but were allowed to slide by. It is easier to just take up the slack than to deal with potential lawsuits and unflattering media attention I would suppose the thinking goes. At any rate, I don't think Slim is just going to skate by here. He may win, but he will be made to look a fool at every chance that presents itself.

I have never understood what the big deal is about requiring someone to have an official ID to vote. You have to have one to drink, rent cars, drive, etc. Some say that a voter ID requirement disenfranchises some folk. Probably not I'm thinking. If one is too lazy or too stupid to get a govt issued ID, then they are probably too stupid to be voting anyway. That is what one party seems to want though. It is easy to convince stupid. Just give them a cell phone.

I suppose that unemployment dropped suddenly last month. There is some braying about such on what passes for the "news" these days. I pretty much don't believe that. Numbers are easy to manipulate for those whose job it is to manipulate them.

In real news, Turkey and Syria appear to be headed toward a showdown. Really (maybe) this time. OK. Turkey is a NATO nation and important in helping to control the entrance to the Black Sea (to keep the Russian Black Sea Fleet bottled. It would have been nice if Ukraine had just told the Russians to get out. Probably not prudent from their point of view though). Anyway, Turkey is very important to the West. It also serves as a buffer of sorts from other Mohammedans. Problem is, Turkey itself may be on the path toward radical Islamization. Very interesting geopolitical dilemma. Syria is run by a strong man who is purportedly a sponsor of terror. Rebel forces are working to unseat Assad and it is rather certain that a good many of those are anti Western Islamists. Assad, while evil, may be the lessor of the two (three or fifty?). His regime pays lip service to anti Zionism and does keep Israel on defense, but he is also not inclined to attack the Jewish State with conventional military means. What will happen after he is decapitated? Probably something along the lines of what we see in North Africa. At some point there will be war. Yep that Arab Spring is really working out.
So what is Turkey (and NATO) to do? Attack Assad and hasten the radicalization of the region or take a vigilant wait and see stance? It is assumed that if Turkey does attack then they will attempt to install friendly elements in Damascus. Problem is, Arabs hate the Turks. Probably matters little whether a Turkish regime is Islamist or secular. There is a history......

I have been hearing some about fairness of late. As in it is not fair for Israel to possess nuclear arms but not allow Iran to do the same. Fairness is over rated and dangerous and has no place in the real world. Israel could not survive more than two strikes (or one) by a nuclear weapon, while the Mohammedans could survive several. It is like Connecticut being surrounded by all the other states that are hell bent on her destruction. If she has an ace (nuclear weaponry) and the rest don't, it makes perfect sense to ensure. by any means required,  that they don't get one (or many). Fairness be damned. 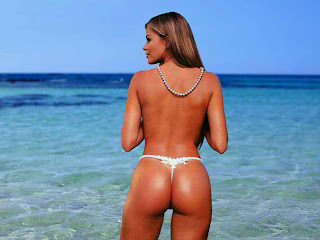 I guess a little Rule 5 is in order. The lovely and talented actress Sophia Vergara for your viewing pleasure. I shamelessly stole this pick from Hawsepiper bigironfish.blogspot.com. The man puts up some excellent pics by the way. Interesting read too.
Posted by Bartender Cabbie at 1:54 PM