Freakin on a Friday

As of this writing there have no reported fatalities in the F18 crash in Virginia Beach. Let us hope it stays that way.

There has been much made this week of Slim trying to "intimidate" the SCOTUS. Really he is does not appear to be so much "intimidating" them but he is using the bully pulpit. Seems odd as the Court does not have any reason to be concerned with the opinions of a president. His remarks about the members being "unelected" is a bit strange. At any rate, Obama is not the first POTUS to have his problems with the Court. FDR and Lincoln come to mind. Of course both of these men had fascist (assuming anyone can really define fascist) tendencies. In the case of Lincoln it is probably more accurate to consider him "proto fascist." Certainly there are warning signs that Obama has some rather odd (for an American) tendencies also. Of course he is not near the man that either FDR or Lincoln were. Probably not even the man that Carter is........

Did I hear that terrorist Bill Ayers making comments about being upset about military members being allowed on planes first? Of course I did. He mentioned that "nurses and teachers" should be afforded the same respect. Certainly nurses and teachers deserve our respect but Ayers is making something out of nothing. What is Ayers doing roaming around in public anyway? Shouldn't he be in federal prison somewhere?

Speaking of terrorists - The Muslim Brotherhood has some of their members here making, it appears, kind of a public relations tour. Hard to believe. Before all is said and done we will wish that democracy was not encouraged in some of these Muslim lands. The whole notion is ridiculous.  Obama is not the first president to believe that democracy is the cure for the backwardness that is Islam though.  As it stands now, Israel is being rocketed from the Sinai and this does not bode well. Let's forget about Israel for a moment though. The real importance of the region to the West is the waterway. The peninsula is "injun country" and will likely become more dangerous as time goes by. Will Israel be forced to again take the area? Will a Western force be needed at some point to safeguard the canal? Time will tell.

Today I heard Allen West (R FL) denouncing the Black Panthers for offering a "reward" for the capture of Zimmerman and also of "starlets" for tweeting his address. I suppose when he referred to "starlets" he was speaking of one Spike Lee. I wonder if West knew that he was directly insulting Lee with the "starlet" reference. He was so deadpan. I guess he could have been referring to Roseanne Barr. I think she did some tweeting of her own. Of course "starlet" is not the word that comes to mind when I think of the lovely and talented Roseanne. West had to be referring to that eunuch Lee.

It seems that some fruitloop groups are wanting us to all boycott the Evil Empire and the Coca Cola company for "sponsoring and funding hatred" or some such. Apparently this brouhaha is over some group that has their collective mind right on the voter ID issue.
There are numerous valid reasons to boycott the Empire; selling Chinese crap (selling out American workers) and predatory business practices to name a couple. Voter ID is not one of them. I try to stay away from the Empire as much as possible but do, at times, find myself there.


Boycott Coke? That is just not American. Of course the execs over at the soft drink giant are reported to be caving. That was predictable. That reminds me of a little episode a while back.......
I was doing some barman work during the Super Bowl that was held in Houston a few years back. The other "major" soft drink is a sponsor of the game and the "real deal" was verboten at any official event. Fine and good I suppose, but I can tell you that drinking folk were not happy. I actually had some stomp off without making a purchase. During subsequent events I made sure I had a few cans of the real thing stashed under the bar for both my personal enjoyment and for discriminating customers. Customers who knew the difference and would accept no substitute. 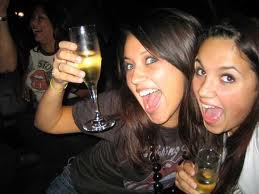 I was thinking about braying some more, but, well, fuck it. Enjoy some rule 5. As long as we are talking about drinking.....
Posted by Bartender Cabbie at 8:46 PM