Not Sure About This Occupy Crowd

This "Occupy" crowd invading Wisconsin this week are not really worth your time for the most part. A bunch of neo hippies playing activist most. If there was a true platform I would imagine there would be some things on it that I would agree with. I don't trust this "globalization" myself and I am fully aware that corporate America is willing to sell the American worker out in the pursuit of profit. These things are a given and need to be addressed.

That being said however, this Occupy movement is really not much of a movement at all. No real plan, no real consensus. Just a bunch of losers walking about braying. A good many of them are of Marxist bent and that won't get anywhere in this country. I hear (and I laugh at) some of them referring to some of the original Occupy Wall Street bunch as "old fighters from early days of the movement." Or some such.

Old fighters? Where did that come from?  Just where was that phrase heard before? 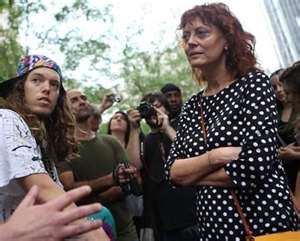 I looked for some Rule 5 from some of this Occupy crowd and Sarandon was the best I could come up with. That is sad. I don't know who the other lady is.
Posted by Bartender Cabbie at 7:12 PM

As a measure of just how feckless this "Occupy" crowd is, Walker won a second time, and by a margin larger than his first win.

Sarandan was quite the hotty years back. I don't like her politics but I give her the respect for going out in the crowd and being there in person. Not like quite a few others who screech and never show up.

Good point. And who can forget her role in "In the Valley of Elah" with Tommy Lee Jones?

I remember Sarandon from Rocky Horror Picture Show. We used to go see that on a Friday night when I was working in Petaluma Ca.