Blue Fist? That Won't Fly In This Country

Did you notice the blue fist that was plastered all over during the Walker recall election in Wisconsin? No wonder he beat the opposition down and then kicked them until they screeched like a queen in a beauty shop.  Even most folk in this country who consider themselves "liberal" are not going to get on board with a "movement" that features such imagery.

It reminds me of the pantywaist version of something that would have been seen in the old Soviet Union. What kind of cocks would think that was a good idea? Has the AFL-CIO (UFO-CIA for us Archie Bunker fans), gone completely off their collective nut? This is communist symbolism; pure and simple and one can't expect any movement using such a "logo" to gain any real traction. They may as well have used a swastika. Some folk are so stupid it is a wonder they remember to breathe. 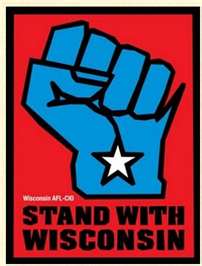 Posted by Bartender Cabbie at 7:52 PM

Here's my take on recent events in my beloved Land O' Cheese.

Appreciate you stopping by!!