Yesterday I came across an article on Yahoo News informing us that NFL Cheerleaders were unhappy with their current "wages." One person, in fact, was in the process of suing the Oakland Raider organization alleging that she is paid less than the prevailing minimum wage. The article in itself was not all that interesting per se, but the responses to the article were.

It seems that some folk don't want these young ladies to be paid. There were many who contend that the ladies should be satisfied with what they have and are using their position and sexuality to further their respective prospects and careers. Perhaps there is some merit to that line of argument but it misses the point entirely. (I could also point out that it does not take a PHD in Psychology to understand that some of the "haters" are just pissed off they did not get to boff a cheerleader in high school and are using the forum to take potshots).

Personally I am in the camp that a fair wage should be paid for all duties performed. As a long time (off and on) employee in the trucking industry perhaps I am more in tune with wage theft than most. The particular employer I work for now has it down to a science but I won't get into that really at this time. What does concern me is that these young ladies are apparently employed by an organization and are not being paid for time spent in the performance of duties. Any organization in the "business" of professional athletics pays entirely too much, (in my opinion) to players in the first place. It just seems like it would be fair play to at least pay the supporting staff (so to speak) at the very least a few hundred bucks a game and a fair hourly wage for all hours put in with practice, etc. etc.

I have known exotic dancers in the Houston market to be capable of pulling down a couple grand a week. I'm not taking a potshot here at professional cheerleaders, but there really is very little difference (let us be honest) between the two.  Nothing wrong with that of course, but let us not put anyone on a pedestal. A cheerleader in the professional arena is doing nothing more than what a contract worker at the local gentleman's club is doing. Giving the crowd a something to see (especially when a team is dismal).

They should be paid accordingly. 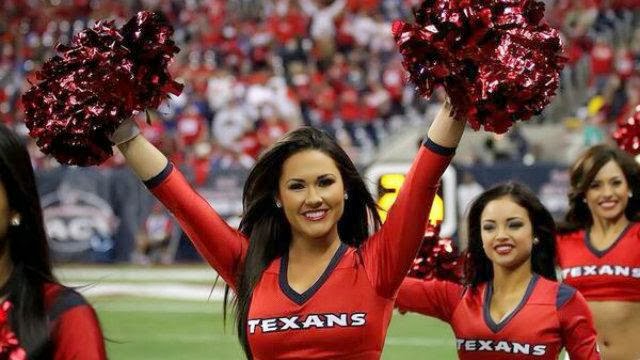 Posted by Bartender Cabbie at 10:31 AM

Well, I've been trying to come up with something witty having to do with payment being proportional to the amount of skin revealed, or inversely proportional to clothing worn, but it just isn't coming together for me. The ladies in the clubs work longer hours and endure quite a lot more indignity, so I'm not sure cheerleaders should receive pay equal to theirs, but they certainly should receive more than minimum wage. What they do is hard work.

Getting paid a decent wage just does not seem too much to ask.